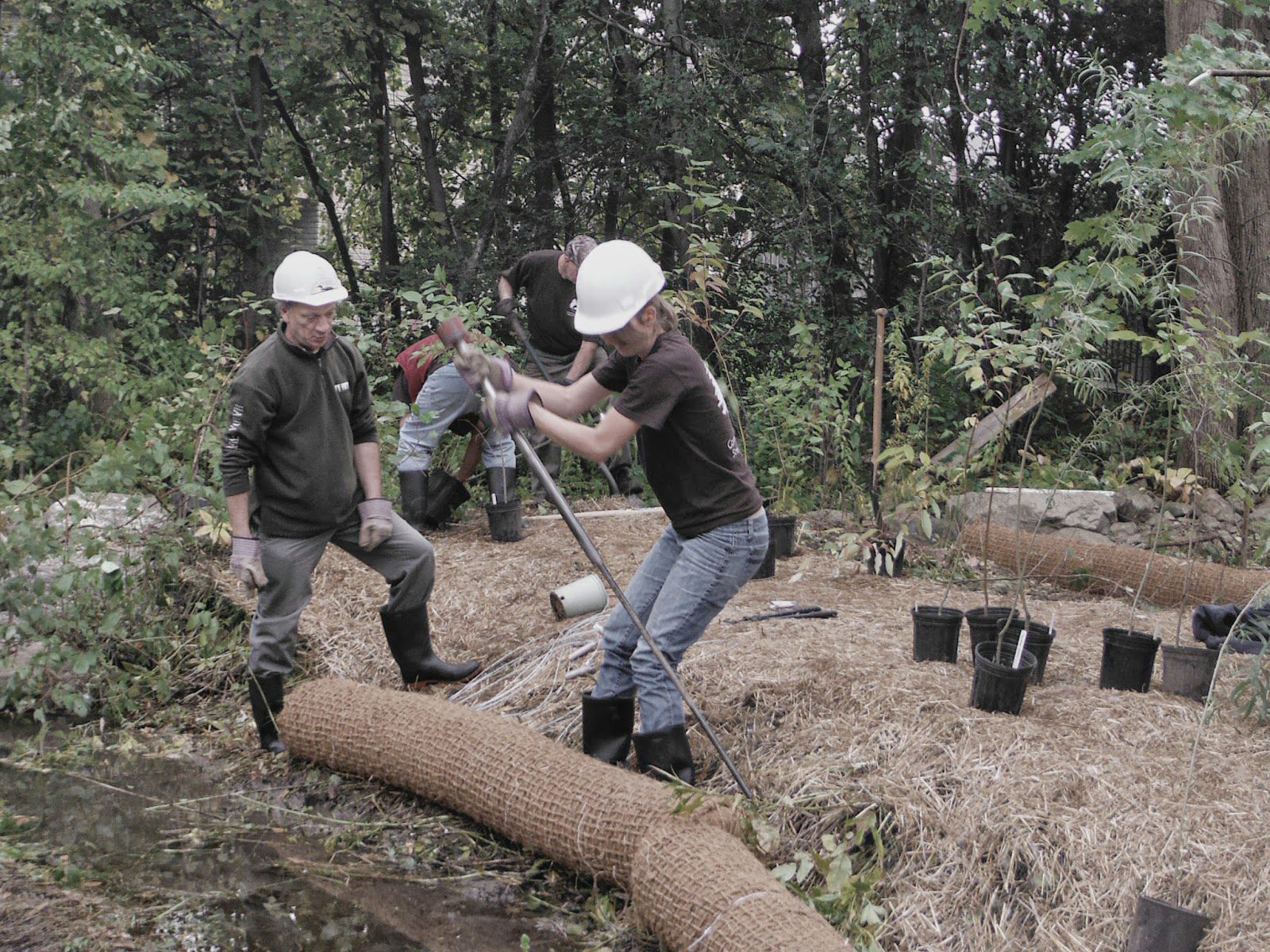 The People Behind the Project

I know that it is never wise to try and thank all of the people who make a project possible because there is always the risk of missing someone, and unfortunately it is the same with pictures.  For instance, I don’t have a picture of our photographer Gina Varrin, or of Sheila Nabigon-Howlett from the Council of Canadians who sat at the information table on Friday afternoon, of J.B. Jaboor who fixed our anchor driver, or of my husband Mark who helped with so many of the logistics, but had to work elsewhere during the two days of the project.

However, pictures are fun and they tell the story, so with apologies to those whose lovely countenances are missing from this post, on with the story….

The day started with transporting our 97 native shrubs the short distance from the Zippel house over to the site: two trips in the back of Roy Perdue’s truck!  With the shrubs unloaded, and grouped into species, the next step was to set up our student volunteer, Megan Krempa, at the information table.  Megan remained diligently at her post greeting the public and handing out information making it possible for the rest of us to disappear behind the trees where the final coir logs were installed, and the majority of shrubs planted.

Before getting down to business, Gina had us pause for a group photo where we discovered that saying the word ‘creek’ makes you smile: imagine that!

As promised, the day began with a demonstration of the techniques involved in installing coir logs to reestablish the stream bank.  Lauren Sharkey, CSSP coordinator, instructed the

group and HPSI member, Thomas Muller, was quick to volunteer his assistance and pick up a new skill.

And then the planting team swung into action…

After planting, the next step was to apply mulch to the site.  We had hoped to use the trees chipped on Friday, but City forester, Scott Keller, wisely advised against this as the Buckthorn berries would create future problems if we used the chips generated at the site. So, City of Peterborough Utility Services staff graciously supplied us with clean chips.  The wood chip mulch will help protect the new shrubs by reducing evaporation (important for shrubs planted away from the stream), suppressing weeds and marking planting sites when lawn mowing occurs.

Clearing away the European Buckthorn and Manitoba Maples made significant changes to the canopy.  Several native species, already in situ, will now flourish with diminished competition for nutrients, and more access to light.  Red Osier Dogwood, Common Elderberry and Sugar Maple were revealed following clearing of stream side invasive species.

We were all surprised with how rapidly the stream regained a riffle/pool physiography.  This reach had become a silent flow of water wending its way through dense emergent vegetation.  With defined banks reestablished, the flow has already increased and the sound of rippling water can be heard once again. The increased flow will also bring about changes  in sediment transport and deposition as the stream, once again, finds its own course.

We will be observing changes to this reach of Harper Creek by recording monthly temperatures and by documenting evolution of the creek through photographic evidence.  In addition, monitoring of shrub survival will allow the HPSI to assess the need for additional plantings in the future.  Established native plants, such as the Common Elderberry in the left field of the picture below, will be recorded. Also of great interest will be any regeneration of native species that may emerge from the seed bank lying beneath the recently disturbed soil of the stream side.  Both Solomon’s Seal and Equisetum species were noted in small numbers following clearing of taller herbaceous plants such as golden rod.

Information on creek changes will also come from the community as adjacent land owners have shown a great deal of interest in the project and the impact it will have in years to come.  Thus, the citizen science aspect of this project will prove financially beneficial to the City of Peterborough and Otonabee Conservation as HPSI members, and adjacent landowners, will provide project follow-up and monitoring.