1.  On July 31, Kim Zippel met with Renee Recoskie of Dillon Consulting Ltd.  Dillon Consulting Ltd., as you may remember from a previous post, was the firm awarded the contract to complete the initial Environmental Site Investigation of the Harper Road landfill.  Renee informed Kim that Dillon would NOT be using the North Tributary as a reference stream for their sampling program.  The HPSI have been given the go-ahead from Dillon to complete enhancement work within the park, as long as the date and location of HPSI activities is communicated to Dillon staff prior any scheduled events.

2.  Immediately following the meeting with Dillon, HPSI members headed to the North Tributary to see how it was fairing in this dry summer weather.  To their surprise, the most obvious change was the number of stems of purple loostrife, Lythrum salicaria, growing both on the stream bank, and adjacent to the many spring-fed channels flowing down the northeast slope.

Uncertain of the impact that L. salicaria, an invasive, non-native plant, might be having on biodiversity, fish passage and the overall hydrology of the wetland, Kim sought assistance from Matt Smith, an aquatic, invasive species expert from the Ontario Federation of Anglers and Hunters.

Matt explained that biological control has been used to successfully constrain the spread of purple loosestrife in many North American wetlands.  In the early 1990's, beetle species of the genus Galerucella, known to complete their lifecycle on L. salicaria, were introduced to North America in order to combat the domination of this plant within wetlands.  So, Laura and Kim returned to the North Tributary to look for signs that Galerucella spp. are active within Harper Park.

This is a great opportunity to learn more about the use of biocontrol to combat invasive species, so stay tuned for a future post on the status of L. salicaria and its natural enemies within Harper Park.

L. salicaria growing along the banks of the North Tributary. Picture taken August 7, 2012 by Kim Zippel. 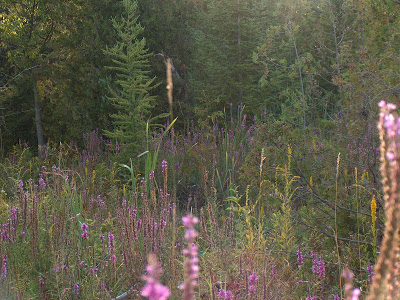 Purple loosestrife is thriving in the hydric environment associated with the springs feeding the North Tributary. Picture taken August 7, 2012 by Kim Zippel.

3.  The Harper Park report, authored by the founders of the HPSI, notes that there is a lack of awareness that this area of semi-wilderness is indeed, a city park.   The relative obscurity of the park within the surrounding community has piqued our curiosity and raised some interesting questions regarding its evolution to parkland and protected natural area.

Therefore, Kim Zippel has begun researching title for Lots 9 and 10, Concession 11, North Monaghan Township, these being the lands immediately west and east respectively, of Harper Road.  Her initial search started with a volume on the history of North Monaghan Township, covering the years 1817 through 1989.  This compilation of township history was authored by the North Monaghan Historical Research Committee in 1990.

Although it is early days, the following facts have already been discovered in the aforementioned book:

As we learn more, and can validate historical facts, watch for a brand new page dedicated to the history of Harper Park.

4.  Now that our access to the northern portions of the park has been cleared through Dillon Consulting, it is time to begin some preliminary shoreline clean-up and exploration of the northern area of the park.

While removing litter, it was suggested that we might also start mapping our stewardship area.  For example, some areas of interest within the park might be: large items that the city may need to remove, hazards, obvious boundaries such as surveyors stakes, or the location of any intriguing features that may be beneficial to document for the future.

For those of you who have never been in the park, it will become immediately obvious as to why we need a map of park features!

Community Stream Stewards Program coordinator, Andrea Hicks, has offered to lend us some handheld GPS devices for the day.  Points marked by volunteers will then be uploaded and a map generated, thanks to the expertise of an OFAH GIS technician.

The tentative date for this interesting first foray into the park is Saturday, October 13th, with Saturday, October 27th as a rain date (hopefully not snow).  More information will be available as we firm up our dates, and you can also contact us through the email link on the home page of this blog.

What we did on our summer vacation was last modified: June 28th, 2017 by Kim Zippel